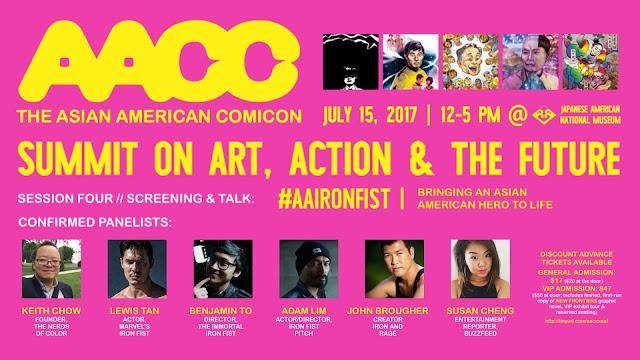 I came across Keith Chow's article "Marvel, Please Cast an Asian American Iron Fist" and his words sparked a significant possibility for me. An Asian American could play a superhero in the Marvel Universe. For a long time, I've steered away from playing a martial artist. For me, it was a negative stereotype associated with Asians. But Keith pointed out the true historical problem. Martial arts characters until now were always portrayed as one dimensional. With Danny Rand/Iron Fist, it could be so much more. Beyond his martial artist skills, we would also see him as a businessman, lover, and friend. This character depth has the power to transform the negative stereotype that forever haunted Asian American actors.

How do I pitch myself for the role? I am more than an actor. I’m also a filmmaker. So I decided to make a pitch video. It would be far better than presenting a head shot, resume, and reel...especially if I was an unknown. I quickly texted a writer friend of mine (Daniel Ho) and asked if he would be willing to write a quick treatment for a pitch. After getting my manager’s ok, I quickly assembled the team and ran with it. It took one day to shoot and a few days to edit. I reached out to all my resources to see how I could get myself into an audition room. Within a week after I released the video, there were rumors circulating that Marvel/Netflix had already decided on Finn Jones to be the new Iron Fist. I was disheartened, and when the rumor was confirmed by the Hollywood Reporter I was devastated. For a brief moment, I had believed I could be Iron Fist. You see, I am 1.5 generation Chinese American. The opportunity to tell the story of a Chinese American who re-connects with his roots and becomes a super hero meant so much to me.

Fast forward a year later I get invited to the Asian American Comi Con 2017 in LA by Keith Chow himself. He invited me to join a discussion panel about the #AAIronfist. My wife without hesitation knowing how much it meant to me helped me book a ticket and hotel so that I could be a part of this event. To be among my fellow Asian Americans sharing stories and ideas was a wonderful experience. It was a short visit but I walked out feeling recharged and inspired! I was ready to fight for better Asian American representation in this industry with my fellow brothers and sisters. It’s time! It’s on!